My talented cousin Steve Kniss interviewed me about my songwriting and edited it into an audio story with some of my music in 2011. Click here to have a listen. 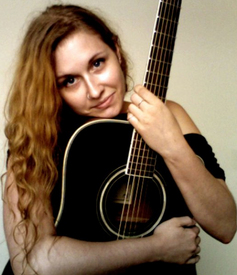 Chris has been writing songs and performing live since 2001, but has been singing all her life. Raised in the Mennonite Church, she was introduced to their tradition of 4 part a cappella singing at a very young age. Her musicianship developed as a member of several auditioned performing choirs, beginning in the Shenandoah Valley Children's Choir from 1993-2000. While a part of the SVCC, she was able to perform in Carnegie Hall and for former President Clinton in the nationally broadcast Christmas Tree Lighting ceremony alongside Placido Domingo and Roberta Flack in 1997. In 2003, Chris became a member and soloist of both the touring and chamber choirs at Eastern Mennonite High School for two years, which included a performance tour in China in the summer of 2004. Chris independently released a solo album, In The Face of It All, in August of 2004. Her music has been played all over the globe, and several tracks from In The Face of It All have won awards/distinctions in a number of public voted contests. A singer, guitarist, pianist, flutist and mandolin player, Chris has performed as both a solo and collaborative artist in many venues all over Virginia, Indiana, Pennsylvania, Ohio, and as far away as Israel/Palestine, in Jerusalem and Bethlehem.